Only one team turns up at Ripley

This was a one-sided match.  Fortunately, the Buccaneers were the one side.  Having lost the services of Simon Leefe, who had suffered an injury the day before playing football (in May!), we arrived with 10 long-experienced campaigners.   In contrast most of our opponents seemed only just to have taken to long trousers.  So, instead of a toss, the captains quickly negotiated a deal whereby the Buccaneers would bat first.  Ripley had asked for a 40-over match and we obliged. 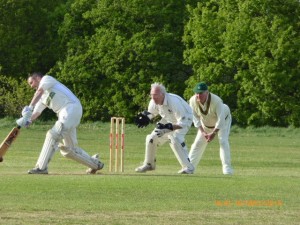 As if in early desperation, Ripley managed to take to the field with 12 men but during the second over their cunning stratagem was spotted by the umpire and so we took the interloper for ourselves– very beneficially as it turned out.

Messrs Hobson and Sujay Chakravarti opened our innings and began cautiously but steadily against two tidy opening bowlers, who were one of Ripley’s rarer species – their voices had broken.  By the end of the 20th over they had 100 runs to their combined credit.  They then accelerated, adding 21 in the next two overs, but alas in the 23rd over Sujay was stumped for 78 and in came brother Subir.   He continued the theme of steady accumulation.  Paul reached 80 and then rushed for the finish line with no sign of nineties nerves, taking his next 20 runs from 7 scoring shots to reach a fine century, once planting the ball in local cottage garden.  Subir meanwhile was accelerating too, hitting what is, he maintains, his first ever six (do we believe him?) and then another, before being bowled for 59.  Rob Rydon then joined Mr Hobson but had little time to display the full range of his shots, ending the innings on 5 not out with Paul finishing on 114 not out.  The Buccaneers total was 264 for 2, an obviously impossible target.

After what was Ripley’s finest contribution to the afternoon, a splendid tea, Rob Rydon and Paul McCann opened our bowling, and very tidily too.  Rob was very threatening, constantly whistling the ball past the bat, but alas had no luck.  Paul snapped up two wickets in two balls in an excellent spell but it was left to Paul Hobson and the young man from Ripley, Josh Thomas, to extract the only teeth that Ripley showed, two batsmen with double figures.  After that is was a matter of trying to remove the remaining plaque, some of which was stubborn.  Steve Brandes came on to wield his dental pick and in a tenaciously accurate spell of 8 overs took 2 wickets for one run, a remarkable return.  Richard Gwynn similarly contributed, bowling 3 overs for no runs and taking a wicket.  The end came in the 32nd over, a total of 53 all out.  While it’s good to have a win, do we need such a gentle start to the season?  Answers on a postage stamp to Mr Close.

This entry was posted in 2015 match reports. Bookmark the permalink.