Vic for Victory as Buccs make it three in a row

Turning the clock back to the heyday of the Buccaneers (when it invariably involved Hack), preparation for this game started at midnight the night before, with a swift half at the Coopers Arms followed by a dance-off at the Fez Club (with two old Buccs minding a youngster who later took 3 for not many).

Surprisingly the Captain and his charges arrived in good time at the picturesque ground of Newdiate CC. The view was slightly marred by the building site of the new club house (6 weeks late), the open air changing facilities and a portaloo. However, the building itself does look impressive and we are all looking forward to going back next year to sample its delights. 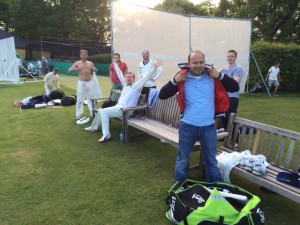 So down to the cricket. We won the toss, elected to bat and it was a decision that was immediately put under the microscope when on the fifth ball of the innings some strange calling, followed by some equally strange running to the same end, resulted in the umpires converging for quite a while. Did the keeper control the ball? Who was actually run out? Did anyone video it for YouTube? Unfortunately there was no video replay available to aid their decision and Sujay ‘The Wall’ lost his appeal.

However, these fears were quickly allayed when James Crichton joined the fray hitting probably the best four fours we have witnessed but unfortunately didn’t go through with his next shot and chipped it back to the bowler. Vic Kandampully got into his stride with some solid hitting especially his cover drives which ended up racing to the midwicket boundary.  There was a good cameo from Tom ‘The Fezter’ Grundy adding some quick runs to get the board ticking along nicely.

Vic scored a measured 82 with some lovely shots before he was stumped trying to push up the run rate after being ably assisted by Messrs Stringer (30) and Ghatak (28) who also did some big hitting of their own.  During Vic’s innings he was caught up in some controversy involving their captain who tried to Mankad him when he was “virtually still in his crease”. This tussle revived itself throughout the Newdigate captain’s innings.

Towards the end of the Buccaneers innings Jim ‘Clairvoyant’ Harcourt called his method of dismissal and what followed was some big hitting from Will Metcalfe (24) and Rob Rydon (doubling the amount of balls he has faced this season, to 6 for another not out big hitting cameo).

Onto the Newdigate Innings. We witnessed a very tight opening spell from the Rydon Express who steamed in downhill with the ball missing the bat and hitting the gloves (and the floor? Ed.) with regularity. He returned superb figures of 8-2-17-3 and with Will ‘on the spot’ Metcalfe, we kept the run rate at bay.

Rydon had the captain caught behind but although he admitted he had hit it, said that the catch was a bump ball – much to our amazement. Unfortunately the umpire was unmoved and after a choice word, Vic caught another volley.

Crispin Vollers produced a cracking leg spin bowling performance keeping the runs down after a drop catch off Metcalfe put him “in a dark place“. He was unlucky not to take more wickets: having an lbw appeal against their captain turned down (after some vigorous team-wide appealing; especially from Vic at Square leg, who received it in the neck again with the comment “I’m going to teach you the laws of cricket”.

James Crichton also bowled well (and quickly) down the hill hitting the captain on the helmet with a short one and Paul ‘the Cad’ Hobson disgraced himself with four double figure overs – his last going for 20 to give Newdigate a sniff of victory.

Tom then produced two of the finest throws from distance, fielding first at deep mid off up the hill and then deep mid on down the hill, hitting the stumps with laser-like precision to run out batsmen 7 and 8.

Will and Tom finished them off in the 37th over with 32 still required.

And the last word goes to Vic who pulled off an amazing catch off Metcalfe to dismiss their captain (for a superb 89) by leaping backwards like a salmon after running in too far. When he hit the floor our hearts were in our mouths for about five seconds as we watched him sprawl about on the floor but fortunately he raised his arm aloft in salute to much celebrating. Kandampully won both Man of the Match and Champagne Moment in one go. A stunning Buccaneers victory.