Sun shines on the Buccs at Betchworth

An uncharacteristically hot and dry Betchworth greeted the Buccaneers for a fixture against Reigate Pilgrims. As the mercury edged towards thirty degrees and with a mere 10 minutes until the first ball was due to be bowled there was slight concern that only three Buccs and two Pilgrims were at the ground. Luckily, the Red Lion provided a few pre game liquids for the three Buccs and by the time they could see the bottom of their glasses the rest of the team began to arrive. 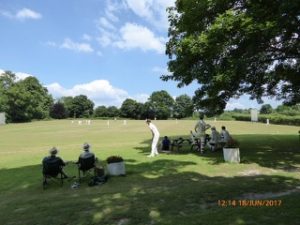 Buccs shelter in the shade

The Buccs were particularly indebted to Neil Robertson who provided five players spanning both the youthful and more experienced ends of the spectrum. Introductions complete, including a Donald Trump style handshake from newbie Will ‘whites of the eye’ Cooper, the team eagerly awaited the toss. The pressure to call correctly was acutely felt with the morale of a side hinging on batting first on the hottest day of the year. Successfully called, the skipper signaled the news to the boundary edge causing great excitement among the troops.

The opening pair of Ollie Metcalfe and new recruit Matt Davies were greeted with a pitch that was the definition of inconsistent. With some balls rearing from a length and others scurrying along the deck it was clear that graft would be the order of the day. Both openers fell to the opposition’s skiddy opener and the team were soon in trouble as young Hamish Robertson was lbw first ball. This brought together the experienced Leefe and the enthusiastic Cooper, who set about repairing the damage in contrasting styles. Leefe looked to keep out the good balls and score of the loose ones, whilst Cooper was all brute. Both survived until drinks before Cooper, again looking towards Sussex, was bowled first ball after the interval.

Skipper Berry was next in and together with Leefe the pair started to find some rhythm. The Pilgrims opening pair had both bowled mammoth spells given the heat and the change bowlers perhaps showed why their skipper was so keen to hold them back. A mixed bag was sent down in the overs before lunch with both Leefe and Berry starting to find the boundary with regularity.

A hearty lunch of excellent South Indian curry was washed down with yet more drinks from the adjacent Red Lion and the Buccs returned to the field looking to set a big total on a pitch that, whilst fruity, was offering full value once the ball got through the infield. Shortly after lunch Leefe mistimed a pull of their very slow fifth bowler for a well crafted and much needed 39. A short but lively cameo from Robertson senior followed and was ended with a stunning catch in the gully. Rebuilding was the order of the day and Berry, who continued to find the boundary with relative ease, was joined by Charlie Wood for what would become the largest partnership of the day. Wood played with the style and sophistication of a man that spent his formative years in the stockroom of Jack Wills and his elegant flicks to leg had the faithful purring.

With a hundred seemingly in sight, Berry took inspiration from Cooper and tried to put a ball on the surface of the moon and was bowled for a run and ball 77. The Buccs fell away slightly towards the end but Wood’s 30* ensured that the team reached 214 from 42 overs. Discipline was going to be required from the bowlers and during the quick turn around the skipper realised that the team contained no seam bowlers. Wood was nursing an ankle injury and Owen Gibbons was clearly too shy to express his talents, as his four over spell late in the day would show. Luckily Robertson Senior instructed Robertson Junior to put away his off spin and have a trundle from the bottom end. A decision vindicated by miserly spell of seam bowling that saw the ball swing and seam off the still lively pitch. At the other end Leefe, fresh (or perhaps still quite sore) from his 22 overs the previous Sunday was handed the new ball with the skipper hoping for a similarly long spell. The combination of swing and SLAB ensured that going into tea the Buccs had taken three of the required wickets thanks in part to some spectacular catching from young Gibbons. 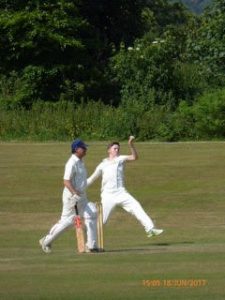 After the break Berry rotated his bowlers with Leefe holding down his end with aplomb. Jordan Powell was handed the ball after the break and bowled, after a throat high full toss first up, with good discipline, nabbing his first Buccaneers wicket in the process. Powell was, however, in danger of beating his own slow mediums to the batsmen with a follow through that ensured the batsmen could see the details of his Harry Potter earring and his heart-shaped tattoo. With Leefe steadily taking wickets and the other end proving equally fruitful, the Buccs soon had the Pilgrims nine down. Three wickets had fallen to Alistair Sewell, whose bowling probably qualifies for Airmiles, given the flight he imparts on the ball. The Pilgrims fell in turn, as they tried to launch him into the pub garden.

As the clock struck six and with the end (the pub) in sight, the Buccs were made to wait for their victory by a stubborn last wicket stand. With nearly everyone having a bowl, the final wicket finally fell to Wood’s off spin, courtesy of another good catch from Gibbons. A fine victory with everyone contributing ensured that the Red Lion saw plenty of business post match. A generous jug provided by the opposition skipper was sunk before heading home with the Hurlingham Club, and the King’s Road, calling.