MMR vaccine too painful for OHJ’s

Mann’s, Milne’s and Rydon’s (the MMRs) made up the Buccaneers team for the final day of the OHJ’s cricket week. 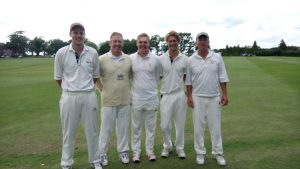 Jim Mann came and went and it was left to Will Rydon and Jeremy to steady the ship, which they did well with an 82 run partnership. Jeremy got 50 and got out, before Henry had a one run partnership with his dad and departed.

After hitting a glorious cover drive, Will then spooned one to mid off. So Alex and Rob Rydon lunched at 117 for 5. A fantastic lunch topped off with strawberries and clotted cream was Rob’s downfall as he fell in the first over after lunch. 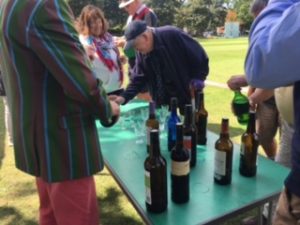 So to the youth policy… Harry Mann and Alex struck it well before Alex tried to loft the off spinner (Stuart Hall) over the top, only to be caught by finger tips at mid off. Ollie joined his brother and not for the last time during the day, the Mann brothers got the Buccs out of a hole. Good running and powerful hitting got us nearer to respectability. But Stuart Hall kept on plugging away and picked up both Mann’s and young Caspar Milne (with a strike rate of 114) to bag a ‘five-fer’. Tom Rydon remained unbeaten in his first outing since last September.

183 seemed woefully short for an OHJ team packed full of batsmen. But then, the Buccaneers had a team packed full of bowlers. First off the rank were Harry and Ollie. The Buccs hadn’t opened with such a pair of quality quicks for quite a few years. The quality of bowling was backed up by the quality of catching, first by Jeremy one handed in the gulley off the full face of the bat, then a lightening reaction by Henry above his head at second slip and finally Tom, one handed at short extra.

At 42 for 3 at tea, the game hung in the balance. It swung the OHJ’s way as Mark Semmence (who usually scores a hundred against the Buccaneers) was dropped in the slips, then back to the Buccs as Caspar removed the nuggetty opener. The clincher (or was it?) was a running catch on the boundary by Ollie off Henry’s cleverly flighted off spin to dismiss the dangerous Mike Harrison. Semmance followed quickly after and at 109 for 8 it seemed just a question of when would we be in the pub.

Did I mention they were full of batting? A genuine opener at No. 9 and a decent middle order bat at No.10 and only three an over off the last twenty. Runs were picked up and we seemed in a pickle until Ollie came back to remove the No. 10 with 149 on the board. Then it was a game of cat and mouse as singles were offered and declined until we could have a go at the genuine No.11.

We did have a go at him but he was up to the task. Simon Warrender collected a well deserved 50 and with one over left was on strike with the score on 178. Simon took a single off the second ball and the No.11 then played and missed. So 5 needed off 3 balls with one wicket left. The ageing captain summoned up his last reserves of strength (did I tell you we were in the 55th over?) and set off down the slope. Just short of a length, a play and a snick and Alex did the rest to pouch it behind the stumps for a thrilling last over victory.