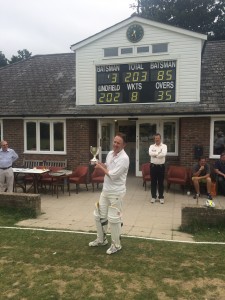 Buccaneers snatched victory from the jaws of defeat in leafy Lindfield to win the inaugural Mark Lawrence Trophy by 2 wickets. New skipper Milne Major managed to lose the toss and the team found themselves fielding in the heat of the day after a splendid Thai lunch at the Standup Inn.

Lindfield is picturesque ground but with some dramatic slope action both parallel and perpendicular to the track. Think Lord’s with a bit more relief. Rydon Senior pulled fast bowlers’ rank to come down the hill with an immaculate eight overs straight (1­23). Moules strapped on the crampons and used the climbing ropes to labour uphill for three overs before giving up and electing to wait his turn to have next use of gravity. Lindfield’s youngsters made steady progress against a Buccaneers attack that struggled for control on the uphill gradient. Yasir Okines bowled plenty of controlled leg spin up the slope but the teenage left handers were particularly adept at the slog sweep with the spin down the cliff with ball running way on a fast outfield for boundaries. Meanwhile Richard “the Power” Hobbs kept things tight at the top end with very nice darts on and around off stump. The Lindfield innings came to end with clatter of wickets from Will Metcalfe who shouldered the burden of the uphill bowling and accurately targeted the bottom of the middle stump. Special mention should go to the high-class keeping of Tom Fletcher who was lightening quick behind the stumps and ended up with two stumpings and a catch behind. The target was set at 203 off 40 overs.

A fine tea was had by all and quick shower freshened the pitch for the visitors to bat on. James Stringer and Ludo Milne negotiated the first 10 or so overs without alarm keeping up with the rate with some free flowing shots and controlled defence. At 40 for no wicket all things looked bright for the Buccaneers, with only a couple of 14­year­old spinners to see off. The 11th over saw the arrival of Hindley T from the top end who announced himself on the match with his first ball as a perfectly flighted ‘chinaman’ spun prodigiously down the slope and through the gate of Stringer’s defense. Hindley continued to torment the Buccaneers middle order that crumbled in the face a controlled mixture of chinamen and googlies that tied Metcalfe, Rydon Junior, Hobbs and Moules in a series of complex knots. Hindley bowled five overs and picked up 5 for 18 to leave the Buccaneers innings in tatters at 62 for 6 in the 17th over. Ludo Milne managed to run himself out taking a quick single off a no­ball with a direct hit from none other than Hindley T.

From this desperate position, with the Buccaneers’ innings in tatters, out strode a Greek warrior in the form of Rydon Senior. With the help of first Tom Fletcher and then skipper Milne, Rob Rydon demonstrated the art of the counter attack. The spinners were defended when they bowled a good one and slaughtered when they missed line and length. The teenage spinning rampage had turned into a festival of towering sixes and punchy drives. Fletcher and Rydon added 80 in double quick time and the skipper kept Rob company adding an unbroken 60 for the 8th wicket to see the Buccs across the line. Rob finished 85 not out and claimed all honours as man of the match and was presented with the Mark Lawrence Trophy by Heather. The trophy was left at Lindfield CC for safekeeping.

Thank you to all for playing and in what was a good match and an enjoyable afternoon.