Howard Spencer, one of the Club’s longest serving Vice Presidents, has died.

He was a regular player and match manager from the late ‘60s to the late ‘80s and for those who played at that time he embodied the spirit of the Buccaneers. With Howard’s (or ‘H’ as he was usually known) name on the team sheet, it meant that the day would be that much more enjoyable for everyone else. 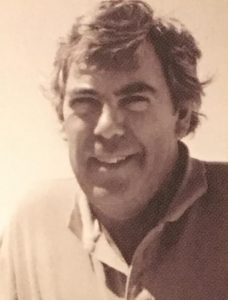 Howard on a sunny afternoon

He was a big man with a big smile and there was no more loyal Buccaneer.

Howard was the author of “Moore Cricket”, which covers the history of the Club from its founding in 1930 by Geoffrey Moore up to 2003 when it was published. It remains as a testimony to the commitment ‘H’ showed to the Buccaneers.

He also re-formed the Buccaneers Golfing Society in the early 1990s when his cricketing days were over and it still exists to this day. His excellent organisation of trips to France and Ireland gave great pleasure to those taking part and they will also fondly recall an annual autumn meet at Felixstowe Ferry Golf Club where former Buccaneer President and retired Bishop, Frank Cocks, was Club Captain and friend to Howard.

Howard showed remarkable resilience over many years when facing the fiercest bowling which poor health could send down and he never lost his sense of humour, even when playing and missing! He was the first to acknowledge that this was in no small measure due to the wonderful partner he had at the non-strikers end, his devoted wife Heather.