How else can these things be explained but for the arrival of Jeremy Corbyn? Just when ‘Craptain’ Stringer was beginning to feel the pressure to deliver after five unsuccessful attempts to unseat the Gentlemen from their privileged perch, along came a win. Vive la Revolution. 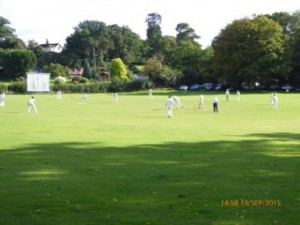 When groundsman Jeremy warned the two captains that worm casts might prove decisive, all arrived on the ground with some trepidation (but no wellies). After a quick sweep and an hour of sun, the Betchworth track resembled its usual self, an ugly-looking pudding. But just as this fact never put off Paul Hobson from a woman in a nightclub, so it didn’t deter the toss being won by under-fire Milliband and asking David Cameron and his cabinet to bat (Enough political analogies. Ed). 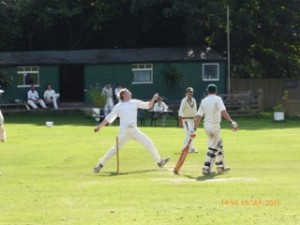 The Greek god roars in

Rydon chose to open with Ollie Metcalfe and Crispin Vollers, tasking them with seeing off the combined menace of Paul McCann and Steve Moules. McCann, stalking in from the North Downs End soon resembled a better Steve Finn, generating late away swing and bounce. After one fearsome lofted on drive Metcalfe succumbed and nicked off with a smart catch being taken by the well honeymooned-Sujay Chakravarti. Vollers was joined by Jeremy Milne and this pair put on 38 runs in trying conditions. Moules’ display should result in a letter to the Editor of ‘Biggleswade Today’, neh The Times, to seek an explanation as to why the Potton skipper considers that he wouldn’t even get a bowl in a Chinese restaurant. His delivery to dismiss Vollers was unplayable, pitching on middle and leg and hitting the top of off. Vollers retired from the pitch muttering that his butler hadn’t prepared him for that type of delivery…

Simon Leefe joined Milne, and the rebuilding continued. Milne was the model of stout defence yet quick to pounce on anything over-pitched or short. Similarly ‘Nissan’ Leefe skipped down the wicket and felt able to punish the newly introduced Gordon and Hobson’s less effective deliveries. It took a piece of inspiration to turn the game. Milne, confusing Hobson’s larrikin activities at extra cover for a lack of concentration, decided to poke a drive straight to him, and then set off for the other end. Alas, even Leefe, who normally covers the ground like the electric mouse in a Tom & Jerry cartoon couldn’t recover and Hobson’s arrow-like throw broke the stumps and their 42 run partnership. 87-2. Newcomer Hobbs arrived and was mostly respectful of newcomer Angus Berry’s SLAB. And so to lunch – as ever taken in the Red Lion – and although a number of Gentlemen remarked that a better lunch was available at the Carlton Club, the Players fell on the fare like the orphan-raised urchins that many of them are.

After a few words from El Presidente, battle was resumed with Darryl Bird (resembling Morne Morkel, but with a better action) taking up from the North Downs End while James ‘E’ Smith (son of the Fall lead singer) did the same at the Trampoline end. The squeeze was applied, with Bird in particular leading the death charge with 2-24 off his five overs. Hobbs was particularly invigorated by lunch, going mad in one over from Smith and taking him for 11 runs before perishing shortly after for 14 to a another smart catch by Sujay. Tom Fletcher, another newcomer, also threatened to get away, but Bird and then the returning McCann, ‘did’ for one Gentleman after another (a phrase redolent to one often muttered by the Gentlemen at their boarding schools). One Rydon came and went (Ed), and then amazingly so did another – the skipper to a steepler safely pouched by Hobson 700 yards from the bat, before the innings was closed at 167 for the loss of seven wickets. Jeremy finished on 75 not out, a fine effort in low scoring conditions.

Craptain Stringer avoided reflecting too much on the misquote of top sporting sage Gary Lineker who asserted that 22 men ran around for several hours and Rob Rydon won. Rydon immediately demonstrated the ‘funky’ captaincy that has led to numerous sporting accolades (excluding yachting, thanks for that tip Louisa), by challenging the ‘blunting’ tactic of opening with Soumak Bose and Sujay Chakravarti. Still Bjӧrn and Lӭefe (sounding more like an Ikea furniture collection) provided a stern test, with Bjӧrn earning figures of 8-2-20-3 including the wickets of both openers and Super-Smith (assisted by a Mark Waugh-like catch at second slip by John Bryant). Rydon at last stirred himself, like a gladiator prowling the arena scenting blood and he fully tested the resolute defence of ‘Jack’ Hobbs-son. However, uncharacteristically he was soon feeling the effects of Gordon’s fading hangover. 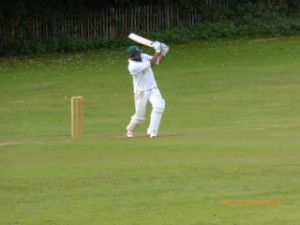 Johnno batted like a man who owns a bat company, with products to sell when he senses there are a substantial number of sales to be made to over-paid City types. He didn’t disappoint adding 62 valuable runs and a 63 run partnership with Hobson. However once he was out and at 95 for four, the match was still in the balance. Okines replaced the tiring god but out strode Man of the Match-elect Moules and a bruised but unbowed Berry. Skipper Stringer paced the boundary like an expectant father as first Moules and then his pal decided that Exmouth market was calling and the hurry up was needed. Moules in particular was savage on Warwick, depositing him for one and then a second (to clinch the match) flat six into the Trampoline End field.

Stringer was looking forward to a reverse of the ritual humiliation of the losing captain presenting the winner with the Mynott thimble. Suspiciously, Rob needed to rush off to a 50th birthday party thus avoiding this fate. I assume one is taught this tactic during a private education. The news was cabled to the Buccaneers’ Ambassador for Italy, the Rt Hon Inzamam ul-Hack who declared that he could now die happy.

Innings of The Gentlemen